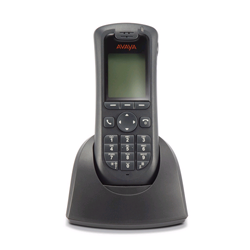 Some of Avaya's cordless phones also utilize IP technology (Voice over IP or "VoIP"). The difference between a VoIP cordless system and a traditional wireless system is that VoIP systems are digital and traditional ones are analog. When you speak into a VoIP cordless phone, your voice is converted to an electronic signal which is then broken down into packets, compressed, and sent toward their final destination by various routes depending on the most efficient paths on your data network or the internet. At the receiving end, the packets are reassembled, decompressed and converted back into a voice signal by hardware and software.

The Avaya cordless phones we carry are supported on the Avaya IP Office and/or the Communication Manager platform. For more information on these feature-rich phones, please click on the links below. Please note - Avaya IP telephones are NOT compatible with other non-Avaya VoIP equipment.

The Avaya 3810 cordless telephone is a digital telephone designed to work with IP Office (minimum release 2.0) by connecting to a DS port. It offers mobility plus access to a number of features and functionality of the connected communications system. The 3810 uses 900 MHz digital technology allowing a maximum range of 160 feet from the base station. (more...)

The executive-styled Avaya 3616 cordless IP phone and the rugged version 3626 wireless VoIP telephone are battle tested and very popular phones for IP office. They give you the mobility and performance you need to run your business efficiently. (more...)

The Avaya TransTalk® 9040 Digital Wireless System is a single or dual zone, in-building wireless system that delivers the quality, features and flexibility to make wireless communications essential for your day-to-day business operations. (more...)