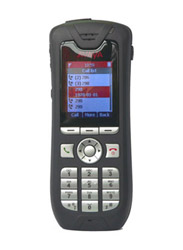 The difference between a VoIP cordless system and a traditional wireless system is that VoIP systems are digital and traditional ones are analog. When you speak into a VoIP cordless phone, your voice is converted to an electronic signal which is then broken down into packets, compressed, and sent toward their final destination by various routes depending on the most efficient paths on your data network or the internet. At the receiving end, the packets are reassembled, decompressed and converted back into a voice signal by hardware and software.

The Avaya IP cordless phones we carry are supported on the Avaya IP Office and/or the Communication Manager platform. For more information on these feature-rich phones, please click on the links below. Please note - these IP telephones are NOT compatible with other VoIP equipment.

The executive-styled Avaya 3616 cordless IP phone and the rugged version 3626 wireless VoIP telephone are battle tested and very popular phones for IP office. They give you the mobility and performance you need to run your business efficiently. (more...)